Modern day science is amazing, we have 2D video which analyses the players style of swing, 3D biomechanics which is like the MRI of a golf swing telling you whether it works or not, force plates which can tell you to the entire weight distribution and transfer in the golf swing, and Trackman which can tell every conceivable piece of data that you would never see with the human eye. 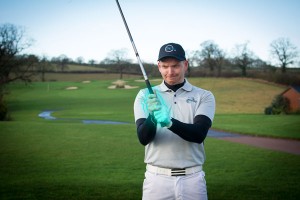 Yet with all of this science available in amazing but highly frustrating sport we are only human.  We will inevitably make mistakes and one of the biggest most overlooked aspects is grip pressure.

Often people will hold the golf club too hard, this can lead to a knock on effect of swing faults and result in tension throughout.  Of course we need to hold onto the golf club with enough pressure to control it but think about the 100m sprinter.  Possible the most explosive sports discipline in the world, when you see these super powerful athletes flying down the track you can see in slow motion how relaxed their faces are.  So even in one of the most powerful explosive sports in the world there is an element of calm.

Of course there will always be an exception, Tiger Woods has gone on record as saying that he grips the golf club firmly, but this is designed to help Tiger hit a fade.  So by holding the club harder he is able to limit the clubface rotation thus making it easier to hit the fade and not hit the hook.

So imagine this scenario;  A golfer holds on to the club to tightly, because of the heavy grip pressure they then find it difficult to set the wrists correctly in the back swing.  This causes the arms to collapse at the top of the back swing because the mind is aware that the club has to get to the top of the back swing but it can’t be set correctly because of the lack of wrist set.  By now the whole upper body is tight as well as being out of sequence with the lower body.  This then results in the down swing be started by the upper body resulting in an outside in swing path, this results in the dreaded SLICE.

This sounds like a very grand imaginative story but I see this scenario several times a week and the catalyst is the grip pressure.

Grip pressure tension can often creep in under pressure, as soon as the hands become too tight it takes a very skilled golfer to be tension free in the rest of the body.

There are so many methods on how to ease grip pressure whether it be the great Sam Sneads analogy of holding a bird so it doesn’t escape but isn’t harmed or whether you use a scale of 1-10, 10 being the hardest and looking for a 4 or 5, all I would say is give yourself some feedback and assess your own grip pressure.

If you are someone who slices the ball especially I would look at the grip pressure first of all.