This allows the arms to be synced with the turning motion of the body.  By syncing the extremities (arms) with the body you will find it a lot easier to control the club face position and swing plane. 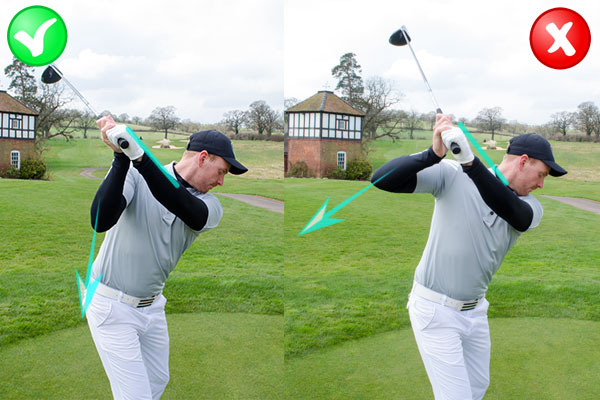 As soon as the arms become disconnected from the body in the back swing (flying elbow) and the through swing (chicken wing) your ability to control the club face and swing plane greatly reduced.

The most common of bad shots that happens from this disconnection is the slice, when the player has a flying elbow in the back swing this often opens the club face by cupping the lead wrist which then results in a down swing path which is over the plane which then often results in a chicken wing which happens to off set the fact the club is swing so far to the left.  So you can see the effect one swing fault can have on the swing, causing a knock on of compensations in this case resulting in the most common bad shot in the amateur game.

The best drill to get you the feeling of the elbows pointing at your hips is to place a towel underneath your armpits.  Then hit mini shots of a tee peg getting used to the motion of the arms staying more connected to the body.

To start with you will feel quite restricted if you do have a flying elbow, chicken wing or both.  The best way to eradicate these faults is to gradually blend in the towel drill into your practice so that you let your elbow positions change what I call organically as opposed to forcing them into the new positions, which could be too much of a shock to the system.

So next time you watch the golf on TV check out those elbow positions! This could be answer you’ve been looking for.

LEFT ARMPIT FOR MORE POWER IN YOUR GOLF SWING.