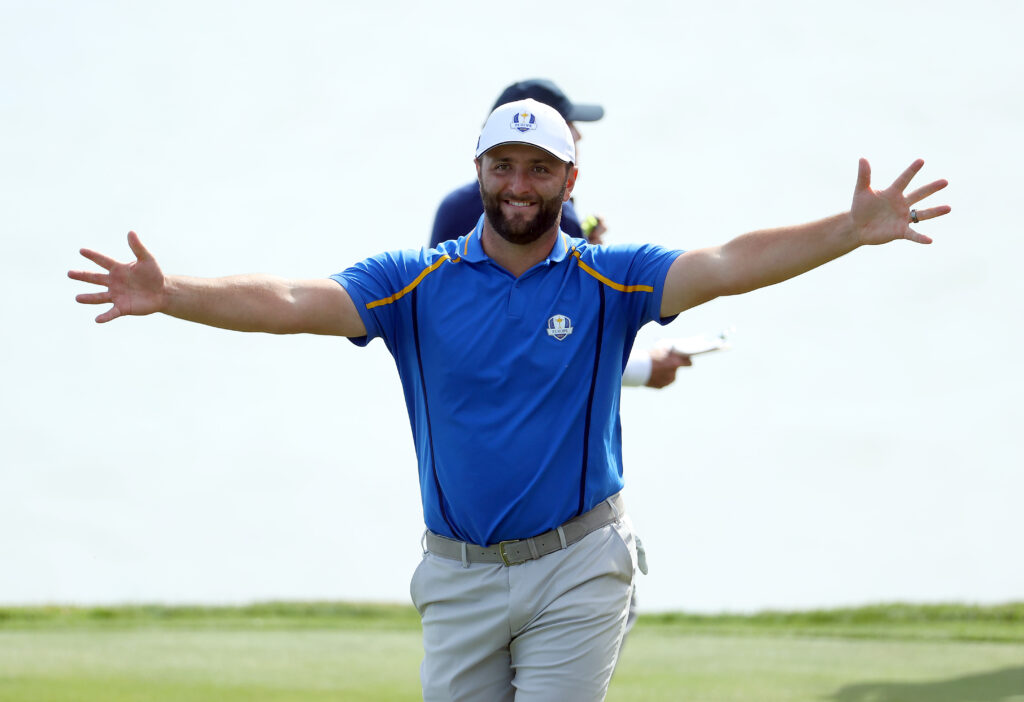 Rahmbo is a Spanish Stallion and a short game wizard and there really isn’t much he can’t do around the green.

He’s currently rated in the top 10 for scrambling on the PGA Tour and is sitting at 1st from scrambling from the fringe, decent going to say the least.

We caught up with him last year and was lucky enough to see the tekkers with our own eyes, so here’s what we picked up from his chipping specifically.

Firstly, Rahm makes an excellent point that the shot he plays is very much dependent on a few factors, these are – the lie, is the pin elevated, and is the shot playing up or downhill?

Once he has established these 3 things, he is then in a much better position to choose an appropriate shot.

For example, Rahm rightly points out that the lie will affect your ability to create backspin.

This is important because you need to determine whether the ball will release as this will then impact where you want to land it.

Before playing the shot Rahm also likes to pace it out, so he knows exactly how far he needs to hit the ball.

He also chooses a spot on the green where he would like to land the ball, and while doing this he considers factors like slope and break.

In terms of setup, Jon prefers to address to the ball with an open clubface, his feet slightly open to target, with his hands slightly further forward so that he can maintain that angle throughout his swing.

This allows him to be more aggressive but still maintain a shallow swing.

He isn’t a fan of breaking his wrists throughout the swing because he thinks it makes it too complicated and inconsistent.

He likes to set the club early and hold that throughout the swing whilst focusing on swinging the arms.

So, what about the tricky lies?

When it comes to playing out of a divot Rahm recommends utilising a steeper swing to make sure you contact the ball properly.

If your ball finishes on a downslope, then he says you can swing more aggressively.

So, if you commit to the shot, you should be able to create lots of backspin.

He says you should never be afraid to play these kinds of chips, as they are opportunities for some of the best shots.

Regardless of what he says though, the thought of those shots still gives us the chills.

So, there you have it, some short game gold from Rahmbo himself.

But if that’s not quenched your thirst for coaching knowledge then have no fear…we’ve got tonnes of short game content just for you.

Hit the link below and treat yourself to 7 days free access on us!

How To PLAY The Game Better! Practice like this!